So, What is the Deal with Potain China?

In the 90’s, Potain opened a factory in Zhangjiagang, China due to the rise of material cost. In order to be more competitive and deliver to its customers more value, some products are produced in the Zhangjiagang factory, However, since its inception in La Clayette, France in 1928, Potain has maintained its “Bureau d’etude” or study center in France. The design of all the main crane components and their mechanism (hoisting and slewing, trolleying, luffing, traveling), and Information technology are produced in France, Moulins. We want the customer to know that Manitowoc OWNS this factory. Indeed, Potain tower cranes have been produced in China since 1994, through licensing agreements and joint ventures. Problems relating to control, coupled with the obvious demand for good quality cranes, prompted Potain to establish a wholly owned manufacturing operation. Helped by the Zhangjiagang municipal authority, it bought out the local manufacturing company that is now called Zhangjiagang Potain Construction Machinery, in Jiangsu Province.

“Our goal is to build cranes specifically tailored to the local market while at the same time reproducing the high standards of quality and control we have at our other factories around the world,” says Etchart, who was the managing director of the factory at the time of this article-01 February 2003, Potain in China.

They also developed a new mast section called the M mast, which is unique to cranes made in China. This mast was designed by the “Bureau D’etude” in France. Jib lengths across the range begin at 40m and go up to 70m ( now 80m with the MC465 and MC475). Maximum capacities at jib end range from 1t to 3t. Crane structures (jib and masts) are all fabricated in-house, but mechanisms are imported from Potain’s factory in Charlieu, Europe.

The 11.5ha factory site in Zhangjiagang includes a massive 60,000m2 (6ha) of production facilities. The plant also acts as a structural steel work subcontractor for other Manitowoc Crane Group factories and can turn out 500t of processed steel a month working just one shift. More than 200 people are employed at the facility, only four of which are not Chinese.

Etchart says that there are about 200 tower crane manufacturers in China, many of which are state owned enterprises making small cranes. Most sell only in their own region. For bigger cranes, there are ‘only’ about 10 players. “We have a niche market strategy,” he says. Potain is aiming at that 10% or 15% of the market that is prepared to pay a price premium of between 30% and 50% for better quality. This market niche seems to be growing. “Slowly, the concept of safety is gaining ground in China,” Etchart says.

We invite customers to see the factory as there is immediately a big change in perception: the quality of Zhangjiagang cranes is “getting close” to that of Potain’s cranes built in Europe.

How is Potain China Different from Chinese Manufacturers?

Therefore, just because the tower cranes or parts of it are manufactured in China, the Quality and Design remain controlled by France. Potain does a lot of quality testing in their testing center in Lusigny and that is why products are only introduced to the market after being tested for six years. Testing is done aggressively on the structural components and mechanisms as well as simulation tests done on real life extreme scenarios.

Each step of the process is controlled by an operator using a checklist and control card. Welding especially in particular is unique to Potain because only certified and trained welders can be part of the process. Potain’s strict quality is also applied from the beginning through the design phase. The design of Potain tower cranes complies with EFM (European Federation of Materials) Handling and EN (European Norm). That is why we saw it fit during our campaign to use the superior software used by Potain as a background from the AD to convey our message:

Potain French Engineering from design to implementation to your job site.

All this control over testing and design are costs added to the final price of Potain. Quality is a cost, so to compare Potain Tower cranes, even those produced in China, to any Chinese manufacturer is unfair and it is a war that us, supplier, cannot win. Imagine buying a fake iPhone – you will be happy to pay 500 Dhs for it but after a few months, you would still need to spend over the price to be able to fix it.

Speaking of iPhones, did you know that iPhones are assembled in China? 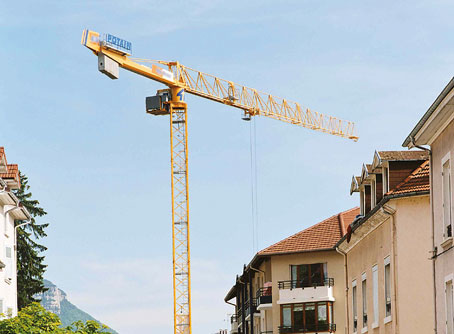 Tower cranes have helped revoluatized the construction industry since the early of the 20th century. There are many maunfactures of tower cranes globally distributed. Nonetheless, onlya a few have gained renowed trust from customers in construction industry such as Potain Cranes. What is unique about Potain brand is their resale value which is derived from their reliability, durability and feasibility. In this post, the resale value of potain is discussed from NFT perspective.

As the CEO of NFT put it “a Potain tower crane is a cheque in your hand. When you buy brand new, you can redeem the price of your investment in ten years” – NFT has in its fleet a tower crane from 1974! It’s older than the company.
So, are there are old Potain cranes available in NFT Stocks? The reason we still have old Potain cranes in our stock is that there is still a demand for them; because you can still trust a 43-year-old Potain to function well. It might not be as up to date or advanced as one from the 2000s, but it definitely does the job. Why? Because of Potain’s durability. A good example is a quality and strength of the steel used in the older cranes (the H20s, the K30s), that do not show signs of metal fatigue or stress after decades of lifting.
In Lebanon, old tower cranes are still used like Potain 744, and older cranes without cabins can be found everywhere. The cost of rent is less than 1,000 USD so NFT’s strategy is to ship all cranes older than the 1990s to Lebanon.

NFT has conducted a research to understand Potain’s market perception in the GCC, we asked contractors to rate Potain on 8 attributes. Potain was rated 8.52/10 for reliability, 8.42/10 for endurance and 7.95/10 for resale value. Now, keep in mind that this is the score as per how customers perceive the Potain brand. This is a good indication of how strong the brand is, but more awareness is needed on its resale value. For more than 80 years, Potain cranes have been part of the world’s most important projects. They deliver capacity, productivity and precision on job sites of any size and especially effective in congested work areas. It all adds up to profitability and return on investment for our customers;“You may have within NFT some good example of Potain cranes which were sold after 10 years with a high/good residual value compared to brand new cranes. While most of our competitors are somewhat struggling to get a high value for their used cranes. Liebherr has also a relatively good resale value (but Liebherr is not selling everywhere as we do ! ) Italian and Spanish brands have much less value and Chinese almost no value when used”, Says Thibault, VP of Sales for Top Slewing Tower Cranes at Potain.

This high resale value of Potain Tower Cranes is due to the following reasons:
1) Potain is a worldwide brand and has an excellent reputation is the market. This is essential to ensure that when you seek a new home for your used crane you have a world of customers who desire to buy it. The higher the volume of new cranes is, the bigger the used market. Therefore, you will always have demand for Potain cranes; new or used.
2) In most countries, you can find a Potain dealer or Potain factory . This will ensure that the manufacturer is always available to offer spare parts, technical study, and services such as installation, maintenance, dismantle and troubleshotting . The powers of the network and their service organization is also key to the resale value. “The network of our competitors is not as worldwide as ours, this is detrimental to their resale value”. Says Mr. Thibault.
3) The quality of the cranes is also recognized, so customers do not fear to buy a used Potain crane. They are known as reliable and durable tower cranes in which their safety standards are never compromised. Potain tower cranes undergo strict quality checks during the production process. In addition, once a new tower crane is fully manufactured, Potain puts this tower crane under severe and reality-like scenarios to test the machine’s endurance. Then allows dealers to test the machine on real jobs sites. This is why it takes Potain an average of six years to launch new products so they can ensure that once the tower crane is in the market, it can stand tall to represent the brand.
4) Potain is known to maintain parts for a long time. You can maintain your cranes with genuine spare parts even up to 20 years. When a part is not available anymore, hit by obsolescence, Potain will search for alternative parts and provide the way to replace it. Potain usually stock spare parts for older, retired models as well because they know their cranes have long lifespans. This makes them a very feasible solution. Some competitors do not even really take care of spare parts, customers are left alone after just a few years. When you buy a used Potain crane you are sure to be in a position to maintain it as per manufacturer recommendations for a long time.

In Summary, resale value is the ultimate features of an equipment brand, combining:
 The level of notoriety of the brand
 The excellence of its French design
 The strength of distribution channels
 The commitment to service
 The availability of its genuine spare parts

In a market that is driven by used tower cranes, it’s important to know that Potain re-sell value must be considered as a factor in the decision making. European tower cranes and Potain mainly have a maintenance book and a technology record that allows prospective buyers to recognize cranes general appearance, brakes, leaks, missing parts like pins or bolts, rust, and how long the crane has been without operation
The Potain Values are the following:
• High-Quality Steel
• Sophisticated Design
• Modern Technology
• Rigorous Testing
• Quality Manufacturing
• Extreme Quality Check
• Customization
• Network & Services
• Highest Resale Value
• High Residual Value
• Safety, Productivity, Reliability, Durability, Quality

“Quality, security, and safety are key considerations for us. With Potain there’s a compelling price-to-quality ratio. We keep our Potain cranes for around 15 years, and after that time we always find them easy to re-sell”, concludes NFT. Finally, we at NFT aspire for value and customer satisfaction that’s why we use Potain Tower cranes in volatile and challenging market.