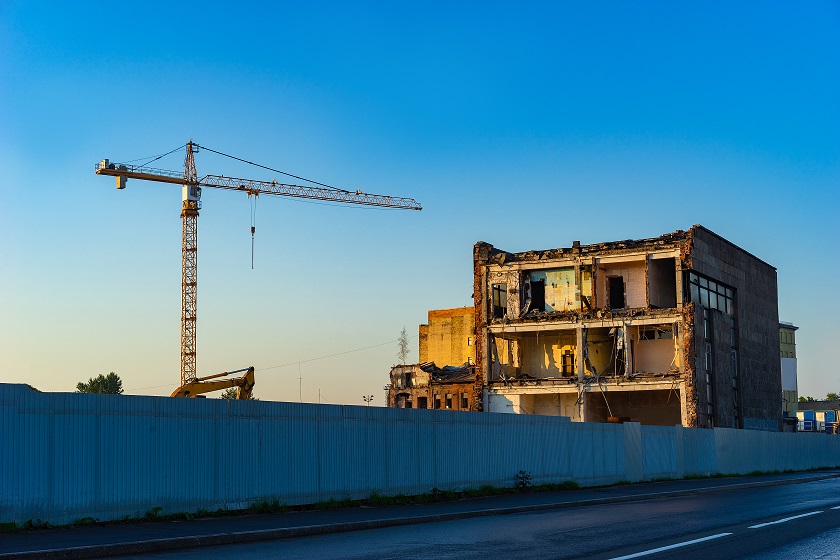 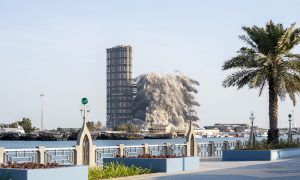 Following the mega event that occurred in Abu Dhabi on November 27th where Modon Properties, the UAE-based developer of sustainable residential communities, had set a new Guinness World Record title for the ‘Tallest building demolished using explosives (controlled demolition), with the successful razing of Mina Plaza towers in the Mina Zayed area, Abu Dhabi, we thought it fitting to talk about demolition and tower cranes.

Work to demolish redundant structures often involves cranes but their importance is gaining popularity more recently over other more traditional methods. Usually, there are two ways of demolishing a building: either by  explosives like with the Mina Plaza towers or by using  tower  or mobile cranes and scaffolding to bring down the building piece by piece. Rather than simply knocking things down, many of today’s demolition projects might better be described as deconstruction or dismantling operations. This type of work often requires a more delicate approach and is ideal for cranes.

Also called Top Down Demolition, floor-by-floor demolition is a procedure that is both technical and complex, where demolition is more of a dismantling operation. Taking a building down in this way needs meticulous engineering investigation from start to finish.  Congested and already built-up urban sites mean neighbouring buildings are often too close for explosive demolition or other similarly disruptive methods. Tower cranes are a widely used solution in these situations and it is a growth area of application

With this method of demolition, the structure is brought down piece by piece from the top down, which is often why it is referred to as ‘top-down demolition’. Often, scaffolding is erected alongside sheeting and crash decks. Firstly, the building will be stripped of elements that don’t form part of the integral structure: services, windows and doors, for example. This is called ‘soft stripping’ whereby the building is “stripped” completely until only a bare concrete shell remains.

Tower cranes are then used to lift machinery such as small excavators or steer loads to the current working level. The tower crane will lift up small excavators to the roof level. Once up on the roof, these excavators will create ramps and openings for waste debris to be transported down the building. They will then work on removing the roof first. A skid steer’s job is to load any material into skips or the lift shaft. Tower cranes areused to bring down debris to the ground level: a tower crane is capable of lowering down skips full of debris from the current working level to the ground level.

Tower cranes can also be used to create cocoon-like protection systems to help resolve any emergency situation on the site.

On a demolition site, one of the biggest health and safety This is when tower cranes can be used to complement standard health and safety procedures to provide an excellent evacuation device. Indeed, with a basket that is safety-rated, a tower crane can be lowered or raised to reach anyone that needs to evacuate  for an emergency.

Why Use Floor-by-Floor Demolition?

There are many advantages to using top-down demolition. It is by far the safest way of taking down medium-rise and high-rise properties and it means that engineers have lots of control on site and can therefore protect both people on site, and others near to the site.

Depending on the size and capacity of the building, up to three cranes could be installed. In addition to the health and safety aspect of using tower cranes for top-down demolitions, this method is also much more environmentally friendly.

Indeed, demolishing a building ‘top-down’ using tower cranes has much less of an impact on the environment. Using a top-down method with tower cranes makes the process more efficient whereby materials can be segregated for recycling and safer for the surrounding environment   because – unlike with explosives where everything is left in a mixed-up heapwith moreharmful products and dust released into the air.

Vibration and noise go hand in hand with demolitions. They disturb both local residents and wildlife. Demolition sites are able to keep noise and vibration to a minimum using tower cranes by:

With traditional demolitions using explosives, dust is a huge problem. It disturbs local residents, affects wildlife, affects green areas and escapes into waterways. Usually, dust can be minimised by a process of dampening down via water supplies or fire hose that spray the piled demolition. There are also spill kits and protective booms that prevent the water from running into drains or waterways. By using tower cranes and a top-down demolition approach, there will be even less dust due to materials being extracted much more carefully away from the public.

The future looks bright for using cranes to dismantle wind turbines, especially in Europe. Indeed, At the turn of the year 2020-2021, more than 5,200 wind turbines in Germany will reach the end of their 20-year feed-in tariff support under the Renewable Energy Sources Act (EEG), with a further 8,000 to follow by the end of 2025. To help manage dismantling and recycling of wind turbines in a safe, reliable and professional manner, a uniform standard has been published for the first time. On 17 July 2020 the German Institute for Standardization published what it says should be considered the industry standard, according to RDRWind, for dismantling and recycling wind turbines. DIN SPEC 4866, titled Sustainable Dismantling, Disassembly, Recycling and Recovery of Wind Turbines, is a 26-page document stipulating framework conditions for the entire dismantling process from planning, via the actual dismantling, through to documentation.