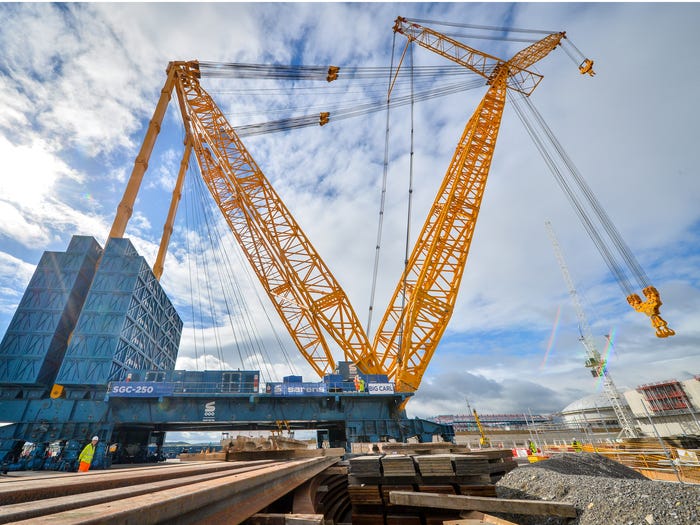 Termed as one of the most important construction equipment, construction cranes have come a long way since they were first built by the Ancient Romans in 500 BC. Over the years, the types and size options of construction cranes have increased but their purpose remains the same to this date; to help lift and place heavy materials.  In a world without cranes, we would not have been able to witness the rise of bridges, skyscrapers, and some of the most marvelous works in the architectural field. Here are some interesting and little known facts about our unsung saviors: Construction Cranes.

The first cranes built by man were by the Ancient Greeks in 500BC. Made of wood and in its most primitive stage, the cranes back then were used to pull heavy objects. Contrary to the highly advanced construction cranes of the modern world today, the Greeks had animals, and sometimes even humans, power their cranes to build some of the most beautiful structures of their day.

Origins of the Name

Cranes are named after the world’s tallest flying birds- Cranes. With their boom resembling the slender long legs, the jib resembling the lanky necks, and being large, it was hard to miss the fact how alike the two looked. Apart from resemblance, cranes are also one of the largest manmade tools to be made and, thus, the more reason to be named after the majestic bird. 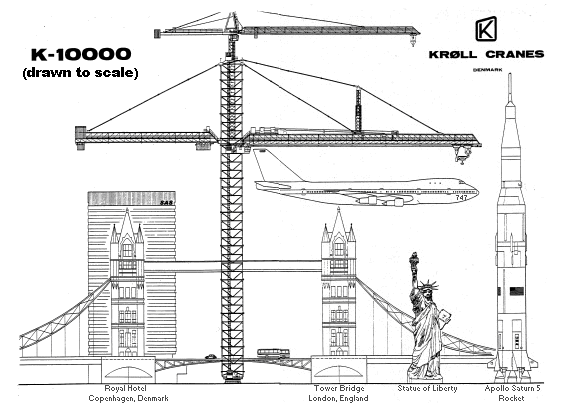 The tallest crane in the world reaches a height of 250 meters, carries more than 3000 tons, and is called ‘Big Carl’ (feature image).The Big Carl was designed by a Belgian crane rental service and was carried to Somerset, UK, on over 250 trucks for months. Big Carl is being used to build the first nuclear power plant in the UK in 30 years. In terms of tower cranes, The KROLL K-10000 has held the title of one of the world’s largest tower crane for over 40 years. Standing almost 400 feet tall with a 266 foot jib reach, the standard jib model can lift 120 tons at a radius of 269 feet. The long jib model can lift 94 tons to a radius of 330 ft. The K-10000 can rotate 360° once it has been bolted to its 40 foot diameter concrete base. This allows the crane to cover an area of 7.5 acres, or approximately 6 football fields. A second servicing crane is attached to the top for the original construction and future maintenance of the K-10000. A system of three counterweights, one set and two mobile on trolleys, weighing a total of 100 tons, are used to balance the crane. Under this load the crane can withstand wind speeds of up to 175 mph. With its immense jib span and load capacity the K-10000 decreases the time for construction on huge construction projects by eliminating the need for small cranes and crawlers.

The First Known Crane to Man

Even though the Greeks invented the first manmade crane, the first crane-like device to be known by man is called the ‘Shaduf’. The Shaduf was used by the Egyptians for more than 4000 years and is still used in some parts of Egypt and India. The primary function of the Shaduf was the transportation of water. With an upright frame with a suspended long pole or branch, the Shaduf is the earliest crane-like tool with a lever mechanism.

Key parts of a construction crane’s body are the boom and the jib. A crane’s jib has been designed specifically to copy the natural movements of a human finger. This design decision was made to hook products and hoist them at a more acute angle, allowing movement on a wider range, and navigating materials in tight spaces.

A Crane for Every Need

Hammerhead cranes cannot be used for construction projects that take place at sea. This is why Floating cranes have come about to serve projects like ports and oil rigs.

With the help of modern technology, a different type of crane has come into existence to cater to every construction need. Fixed cranes, themselves, have over 10 types of cranes available for use. Each type of crane can be used for different projects, terrains, and environments.

ConExpo has dealt a new hand to visitors and exhibitors at this year’s show: the outdoor Gold and Silver lots attendees are used to are being replaced by a new lot, in a new location. The new location is a six-minute taxi drive from the Las Vegas Convention Centre, at the junction of Sahara Avenue and Las Vagas Boulevard, close to Circus Circus. Dedicated shuttles and the monorail will allow visitors to get between the locations: there will undoubtedly still be plenty of relevant exhibitors in the halls, as well as the larger outside exhibits in the new venue. The new ‘Festival Grounds’ will replace the space lost in the Las Vegas Convention Center’s Gold Lot due to an impending expansion to the facility.

Despite the rise of the COVID-19 virus, the Association of Equipment Manufacturers (AEM), organisers of ConExpo, has reassured the industry that the show is on track to go ahead. Exhibits are being set-up, and the AEM is taking careful steps to ensure a healthy show. The AEM says that its top priority continues to be the health and safety of all participants at ConExpo, including attendees, exhibitors, vendors, staff, industry partners, and others involved in the show. The organisers are closely monitoring the news and will follow any protocols that are provided by the Centers for Disease Control (CDC) and the World Health Organization (WHO). Hand sanitizer will be available in all registration areas, media rooms, information stands, the international trade centre, meeting/education spaces, workforce and VIP areas. Further, staff will also be cleaning those areas more frequently, especially tables, keyboards/screens, door handles. We have also confirmed hand sanitizer stations will be located throughout the grounds. However, some exhibitors have dropped out such as the Platform Basket. The northern Italian spider lift manufacturer has taken the decision not to attend Conexpo next week in order to ensure there is no chance or concern of spreading the Covid 19 virus. In a thoughtful and sad statement to Vertikal.Net the company said:

“Our company is located in the North of Italy (Emilia Romagna), where Covid19 has affected part of the population and where some restrictions have been outlined by our department of health.” “For this reason, and in respect of the North America people, Platform Basket has decided to give up the exhibition, even if we are now very close to the opening and the event is one of the most important international shows in the access platform field. And where it was a very important occasion for us to display our spider lift range and to present our new model the Spider 20.95.”

On the other hand, Manitowoc is looking forward to Conexpo to showcase the new hydraulic luffer and self-erecting tower crane models. Potain is to launch its new MRH 175 luffing jib tower crane at Conexpo next month and follows the launch of its MRH 125 a year ago. 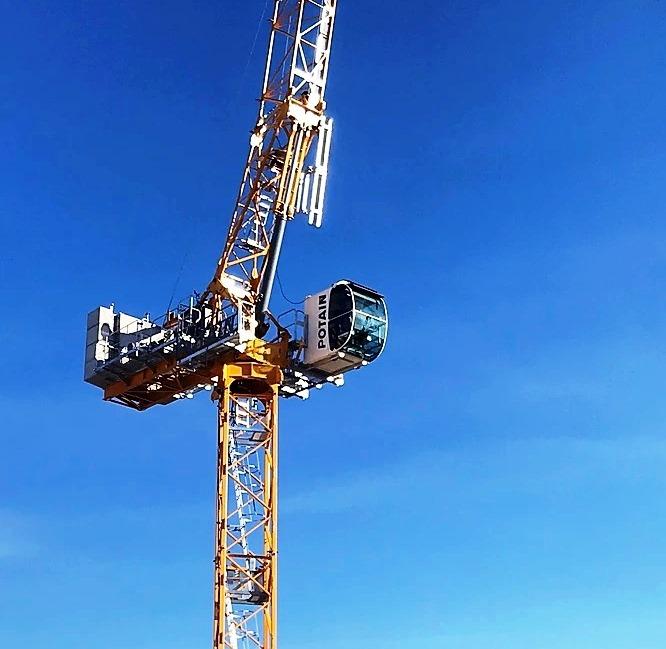 Maximum capacity is 10 tonnes and maximum jib length is 55 metres with a tip capacity of 1.5 tonnes or 2.7 tonnes with a 50 metre jib. Fully luffing the jib takes less than two minutes and the maximum line speed is 215 m/min when paired with the high performance 90HPL25 hoist. Manitowoc says its fixed counter jib and topless structure design helps fast erection and dismantling as well as making it more compact for transport needing only four standard containers. The crane elements weigh less than 7.7 tonnes.
The MRH 175 has an out-of-service radius of 10.2 metres. Freestanding heights of up to 62.8 metres are available with the two metre K-mast sections and the crane is also compatible 1.6 metre K-mast sections. Almost 1,000 metres of rope is available with the 90HPL25 winch.
Potain is to launch its new MRH 175 luffing jib tower crane at Conexpo
Thibaut Le Besnerais, vice president of global products for tower cranes, said: “Hydraulic luffing topless cranes have a very strong future in our industry, and we’ve been pleased with the uptake over the past two years. Potain customers have seen the advantages these new cranes deliver and how they help them achieve a stronger return on investment on their projects. We have a strong technical training program to accompany our new MRH cranes, and the feedback from the market has been very positive.”

Manitowoc is also to unveil the Potain Hup M 28-22 – complete with a new transport axle for the regional market at Conexpo.