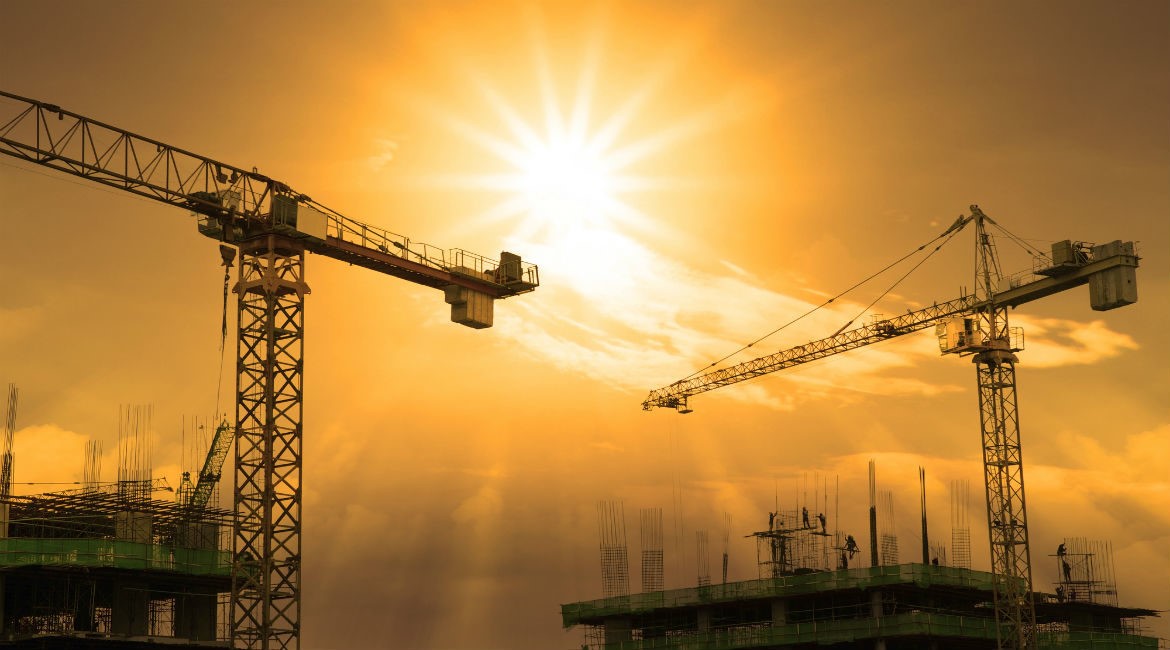 In the past few years GCC countries have seen significant investment going toward the infrastructure and almost every month, the news headlines consist of major projects being announced. In the report we are looking at the factors behind the growth in the infrastructure in the region and introduce some considerable projects.

According to a report by the International Monetary Fund (IMF), “The GCC economic model relies on oil as the main source of export and fiscal revenues (Figure 1). The government is the dominant force in the economy, receiving oil export revenues and in turn distributing them to citizens. A portion of these revenues is spent directly by the government and provided to citizens through transfers and public sector jobs; another portion is invested in infrastructure and real estate, education, and health; while the rest is saved, including in sovereign wealth funds (SWFs). Most GCC countries have long oil and/or gas production horizons and, consequently, have significant wealth underground as well as saved in SWFs or at the central bank”.

According to Global Finance, An infrastructure boom is taking place in the GCC. Most of the GCC countries have some kind of 30-year plan or vision to develop projects, as these oil-rich countries look to invest surplus funds in transport, utilities (power, water) and petrochemical infrastructure to keep pace with their rapidly growing economies and populations.

Before getting into the details, according to Invstopia, infrastructure is the term for the basic physical systems of a business or nation — transportation, communication, sewage, water and electric systems are all examples of infrastructure. These systems tend to be high-cost investments and are vital to a country’s economic development and prosperity.

Visions of the leaders

In the UAE, the government has a dedicated ministry specially for infrastructural development. According to Khaleej times, Energy, utilities and transportation sectors in the UAE will see massive growth in the next two decades as the government will pump Dh1.3 trillion in the development of these sectors, analysts said. Recently, Abu Dhabi National Oil Company (Adnoc) has announced plan to invest Dh165 billion in downstream sector. Also, the UAE is investing billions of dirhams in transportation sector such as Etihad Rail, Dubai Metro and Hyperloop.

According to Middle East Rail, $250 billion is expected to be invested in the Middle East on various railway projects over the next decade. This year alone, it’s estimated that spending on 162 regional projects to be over $86.7 billion. 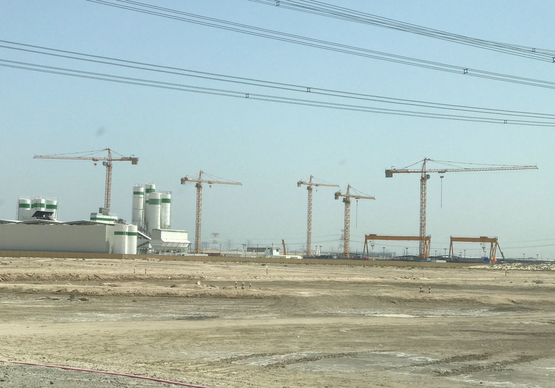 In addition, billions of dirhams are currently being pumped into the development and expansion of Al Maktoum International Airport and Abu Dhabi Airport. In addtional, the metro line expansion for the Expo 2020 site where NFT has a dozen tower cranes installed, is another main infrastructure project. According to Strategy& report, other GCC governments are also investing significant amount to develop infrastructure. Saudi Arabia is likely to spend Dh4 trillion ($1.1 trillion) from 2019-2038, while the UAE is scheduled to invest $350 billion over a similar time frame. These large development schemes can allow local companies not just to substitute imports, but also to grow non-oil exports by enhancing their capabilities.

According to Strategy& report, GCC governments need to think logically about how they balance the need to localize manufacturing while pursuing sound economic policies. There are many capabilities that the region does not possess because of its small size and hence needs to import to build infrastructure. According to Emirates News Agency (WAM), earlier this year, the development journey of the UAE aims to place the country at the highest levels of global competitiveness, to provide the best in class quality of life to people and achieve their happiness, said His Highness Sheikh Mohammed bin Rashid Al Maktoum, Vice-President and Prime Minister of the UAE and Ruler of Dubai. His comments came during his visit to The Sustainable City – the first net zero energy city in Dubai. He was accompanied by Sheikh Hamdan bin Mohammed bin Rashid Al Maktoum, Crown Prince of Dubai.

“Our vision is clear in terms of establishing sustainability’s pillars as a key component of our development journey, which is part of the national agenda. We are committed to sustainability, which is a top priority that we strive to implement taking into consideration environment conservation, and balance between economic and social development,” Sheikh Mohammed said.

Saudi Arabia and the increase in Foreign Direct Investment (FDI) 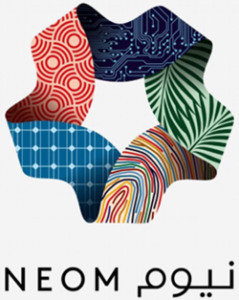 According to a report by CNBC, Saudi’s $500 billion mega-city NEOM is attracting ‘overwhelming’ interest from investors

With ambitious plans to transform its economy as part of the crown prince’s Vision 2030, Saudi Arabia is hoping to boost foreign direct investment (FDI).

With ambitious plans to transform its economy as part of the crown prince’s Vision 2030, Saudi Arabia is hoping to boost foreign direct investment (FDI) into the country as it embarks on a post-oil era and ambitious mega projects like the futuristic city of NEOM.

Ibrahim Al-Omar, governor of the Saudi Arabian General Investment Authority (SAGIA), said foreign direct investment (FDI) was growing in Saudi Arabia. Official figures from the World Bank show FDI net inflows were $7.453 billion in 2016 while net outflows were $8.936 in the same year. Since then, however, Saudi Arabia’s Crown Prince Mohammed bin Salman has appeared to take the reigns on transforming the economy and society by introducing a raft of liberalizing reforms.

“We have seen a growth for foreign investment — about 50 percent comparing the first quarter this year to the same period last year. Also, the (FDI) inflows we have seen about 40 percent,” Al-Omar – governor of the Saudi Arabian General Investment Authority (SAGIA)- told CNBC as she hosted a session on the Saudi Arabian FDI landscape at the Gateway Gulf investment forum in Bahrain.

The project is estimated to take between 30 to 50 years to complete, however, with the first phase due by 2025.

“And the $500 billion, we’re not going to spend it all tomorrow and, quite frankly, a lot of it will come from private investments,” Kleinfeld (NEOM’s Chief Executive) said. “But what I’m seeing today is that the interest in partnering is overwhelming.”

Kleinfeld said that key concepts for NEOM, such as mobility around the city, were still being explored and there “there are gazillions of players that are willing to help and willing to invest in that,” he said. With the current wealth of the region, which have significant amounts in their Sovereign Wealth Funds (SWFs) and an increase in Foreign Direct Investment (FDI), the plans to improve the infrastructure in the region is well underway.

Fluctuations in the price of crude oil

Oil prices have been fluctuating in the past few years and based on most sources, the outlook doesn’t seem that the prices will increase significantly next year. As outlined in the graph below by Macrotrends website, the oil prices have decreased since 2014.This decrease in oil prices is another reason as to why, GCC countries have looked into diversifying their economies and lower their dependencies on oil and consequently investing in infrastructure. 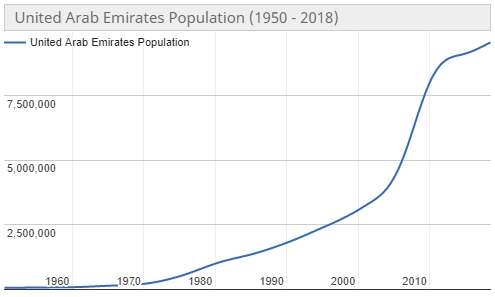 The graph above by Worldometers website, clearly show the significant increase in the population of the UAE and just in less than 15 year the population has almost doubled. This amazing increase in population not only shows more job opportunities in the country but also a major need for a better infrastructure.

Economic diversification in the region

According to a report by the International Monetary Fund (IMF), the Gulf Cooperation Council (GCC) growth model has delivered strong economic and social outcomes over several decades. GCC economies rely on oil as the main source of export and fiscal revenues. Over the years, GCC governments have increased public sector employment and spending on infrastructure, health, and education. This has helped raise standards of living and support private sector activity, particularly in the non-tradables sector.

The current growth model has weaknesses, however, and increasing economic diversification is paramount. Greater diversification would reduce exposure to volatility and uncertainty in the global oil market, help create private sector jobs, increase productivity and sustainable growth, and establish the non-oil economy that will be needed in the future when oil revenues start to dwindle. A number of policies have been adopted to diversify the GCC economies and reduce their reliance on oil. A stable, low-inflation economic environment has been achieved, the business climate has been strengthened, education has been expanded, trade and foreign direct investment (FDI) has been liberalized, and the financial sector deepened. National development plans are being implemented with a view toward boosting the human capital of nationals, and developing new industries and services that can employ high-skilled labor. Nevertheless, to date these diversification strategies have yielded mix results. The share of non-hydrocarbons output in GDP has increased steadily but is highly correlated with oil prices, and progress with export diversification, a key ingredient to sustainable growth, has been more limited.

One of the key reasons as to the increase in the investment in infrastructure is to make sure the economic diversification plans can actually be achieved but of course as mentioned above, it has had its challenge as well.

With $1.2 trillion of roads, buildings and infrastructure projects planned across the GCC at the start of 2018, according to Research and Markets report, the region offers abundant opportunities for construction contractors, engineers, project managers and manufacturers. In the next two decades, according to Strategy& non-OECD states are projected to spend more than $57 trillion on infrastructure projects, compared to $34 trillion by OECD countries, it said. Historical under-investment in infrastructure, rapidly-growing populations, the emergence of the new Silk Road trading route between the MENA region and Asia and the need to diversify beyond oil and gas are all contributing to the need for heightened investment in infrastructure.

The six-strong panel, moderated by Charles Lilley, partner at law firm Bryan Cave Leighton Paisner (BCLP), took to the stage to discuss all things related to the Kuwait National Development Plan. Commonly referred to as New Kuwait 2035, the programme seeks to increase the country’s revenue from $43.6bn ( KWD13.2bn) in 2017 to $164bn (KWD49.8bn) by 2035. With these figures in mind, the country’s leadership has placed great emphasis on the development of transport infrastructure, commercial buildings, industrial facilities, and renewable energy infrastructure.

The issue of technology as part of Kuwait’s New Vision 2035 was also discussed, particularly in the context of numerous planned high-profile smart city initiatives rolling out across the region, notably the planned $86bn (KWD26.1bn) Silk City mega-project. “Smart cities are no longer just something that is nice to have, but a requirement by default,” said Nabil Kobrosly, vice president of business development for Parsons’s built environment division in the Middle East and Africa. “In each and every project that we do, especially in construction design, provisions are made for smart city consultants or technology operators to be able to bring in their equipment.