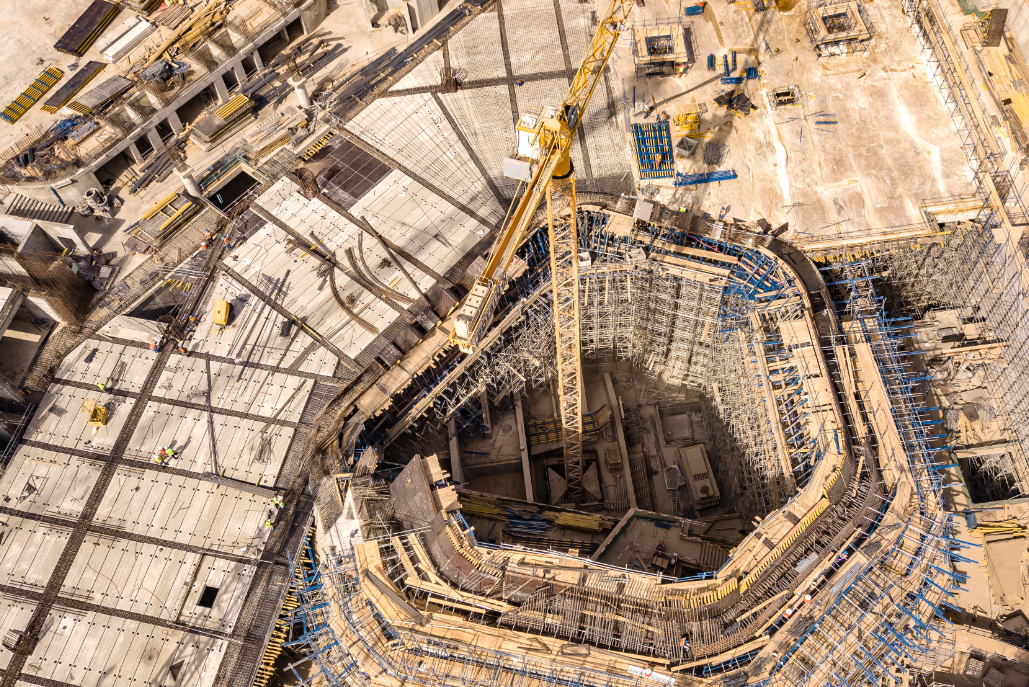 Perhaps this time last year, the construction industry was preparing for the upcoming year with some of the biggest projects in mind. However, 2020 had both good & bad news for this industry. Earlier this year, predictions were made on how the construction industry would not be able to match its performance in comparison to the previous years. With the outbreak of COVID-19, hope seemed to fade away. Experts said the growth curve could stay flat this year; considering the strong 2018-19 year.

Governments and public authorities will likely be aiming to advance spending on infrastructure projects as soon as normality returns so as to reinvigorate the industry. This will be spread across all areas of transport infrastructure and energy and utilities. With interest rates falling to record lows, borrowing costs will be at a minimum, but the success of government efforts to spend heavily on infrastructure will be dependent in part on their current financial standing. Moreover, with most governments prioritizing cash hand-outs, particularly to the economically weaker segment, their capability to invest in the infrastructure segment is likely to be constrained, especially in countries with high debts. The decline in commodity prices due to slower global demand, however, will negatively impact the fiscal health of governments in major commodity exporting economies, in addition to reduce new investment in the oil and gas sector in particular.

Although the challenges faced by the sector are plenty, there came along several opportunities and some governments have not stopped their initial plan to invest in infrastructure despite the pandemic:   the demand for better services- from healthcare to construction industries- has brought into attention a few key projects that authorities will have to – or continue to- focus on. These projects also shed light on the concerns for many developing nations as they will have to strengthen their educational, hygiene, and health industries.

Projects in the Gulf Region

In April 2020, the Cooperation Council for the Arab States of the Gulf came up with plans targeting the utility and transport domains. These projects are to cover the GCC region and will cost $5.5 billion. A significant part of the total amount, 67%, has been contributed by Saudi Arabia.

Many top journals and reports have pointed out that the construction market of GCC is evaluated to be worth $2.4 trillion. They had over 23,000 ongoing projects in the region before the end of April. With the launch of more new projects, GCC members have taken a prudent step towards future growth and development.

As Their approach was affected by the virus outbreak and the sudden drop in the oil prices, they had to face uncertainties. The local industries have been hit badly. The authorities have been continuously working to make the most of this opportunity. This renewal of all sectors is being called as Post-COVID Expo. Multiple plans are also being developed to streamline and smooth-down the transition phase. GCC is still working on these plans, and there are numerous amendments yet to be done.

An example of how priority investments will continue is the UAE’s focus on the Rail Network and its expansion. CRRC Corporation Limited has been allowed to manufacture 824 wagons which will be made based on the regulations set by GCC and will have the best in class communication control, braking, safety, and signaling systems. They will be custom-made to perform even in harsh weather or environmental conditions. Etihad Rail is looking over the process of this project and aims to raise the railway to be the primary mode of freight haulage on the Emirates. The association also states that after stage 2 is appropriately executed this could link the entire nation together. This could connect the Khorfakkan & Fujairah to Ghuweifat together. It is being said that this new project would help the region in connecting the principal trading centres and industrial ports.

The list includes the Port of Fujairah, Khalifa Port, Jebel Ali, and even ICAD / Mussafah’ it will also promote cross-border rail traffic with GCC. According to the Chairman of Etihad Rail, after the completion of this project, they will have a hike in their annual rail transport. The capacity will rise to 59 million tones and will also support nationwide railway network links.

Etihad Rail is planning to bring a revolutionizing change in the logistics and freight transport industries of the United Arab Emirates. Through this, they will be able to establish a proper connection between the end-users and operators. They will be supporting the industrial sectors, primarily the combined transport domain while addressing the consumer requirements effectively. The Etihad Rail has been working towards the UAE’s vision that reflects sustainable transportation is crucial for economic growth.

The Ministry is planning on implementing all these projects in an environmentally friendly way.

ArRiyadh Development Authority(ADA) is undertaking the construction of the Riyadh metro project in Riyadh city of Saudi Arabia. The metro project is part of Riyadh’s Public Transport Project (RPTP) plan that was approved by the Council of Ministers on April 23, 2012. The plan has been prepared by the High Authority for the development of the city of Riyadh.The project is also known as ‘King Abdul Aziz Public Transportation Project’.

The current daily traffic demand is 7.4 million traffic trips, out of which almost 90% is met by private automobile, the daily demand is expected to exceed 12 million traffic trips by the year 2030. This huge increase in traffic coupled with high dependence on the automobile has led to severe traffic congestion, especially during peak hours on the major roads of the city’s transportation system. In order to meet growing challenge of the rapid urban growth, the ADA, the City’s planning body under the jurisdiction of High Commission for the Development of Arriyadh, has carried out a number of metropolitan strategic studies, with a sustainable public transportation system as a cornerstone, with the aim of reducing automobile dependence and significantly improving the level of service of the transportation system.

The Metro project once complete will incorporate six main routes covering a total length of about 176km. More than 73.4km of the metro in the capital would be underground. The underground tunnels are 41.7 percent of the total length of the project. This new public transit system provides citizens with advanced solutions for moving around the city easily, currently still under construction despite the pandemic, Riyadh Metro is being built by a consortia of 23 international companies. With driverless trains cars equipped with cutting-edge technologies and Wi-Fi, Riyadh metro project offers integrated solutions starting with cars parking spaces, multi-lines bus network, and cutting-edge. NFT has installed 28 Potain tower cranes though its sister company in Riyadh Arabian Towers Company including six MCT 205 models and twelve MC 310 K12 models.

The government had planned to boost capital expenditure by 40% in FY2019/20 (starting June), with a focus on the power and transport sectors. In July, the Electricity Holding Company stated that it was seeking an EGP20 billion (US$1.2 billion) loan to increase the national electricity grid’s capacity by 145 MW. For the transport sector, Public Enterprises Minister Hisham Tawfik announced the formation of a new transport entity to support local products and foreign trade, as well as the railway modernization program which will expand the metro, introduce light rail and increase rail freight capacity to reach 25m tonnes by 2022. With a population of approximately 17 million, Cairo is one of the most densely populated cities in Africa. Operated by Egyptian National Railways (ENR), its railway system transports nearly 500 million passengers and 12 million tons of freight each year. Cairo Metro is the first metro network in Africa and has been operational since 1990. The network consists of two lines, and a further two are planned. Line 2 was built in 1987, Line 3 A major part of the Line 3 will be underground construction began in 2007, and construction of Line 4 is yet to commence.

However, in a blow to infrastructure investment growth, particularly for railways, international loans of EGP30.8 billion (US$1.8 billion) allocated for railway projects will not be disbursed until mid 2021 as lenders reprioritize financing in response to the COVID-19 pandemic. The Transport Ministry was hoping to access EGP25.7 billion (US$1.5 billion) in funding for the project to convert the 22-km Abu Qir-Alexandria railway into a subway, and a further EGP5.1 billion (US$300 million) to add additional tracks to several passenger lines. Lenders for the projects include the European Investment Bank (EIB), European Bank for Reconstruction and Development (EBRD), the Asian Infrastructure Investment Bank (AIIB) and the French Development Agency (FDA). Egypt’s National Authority for Tunnels (NAT) is pushing ahead with evaluating bids for civil works packages for the planned western route Cairo Metro line 4. NAT is also in negotiations with Japan’s Mitsubishi and Orascom for the metro line’s eastern route civil works package. The Egyptian Electricity Transmission Company (EETC) has postponed the tender closing date for the contract to build the infrastructure to facilitate electricity interconnection between Egypt and Saudi Arabia, due to the ongoing virus outbreak. It has stated that the successful bidder will be announced in June. The estimated budget for the interconnection line is EGP27.4 billion (US$1.6 billion), and it paves the way towards establishing a unified Arab electrical network.

Difficulties financing infrastructure and energy projects will also constrain the expansion of the construction industry.

Russia: Russian construction output is expected to contract by 4.8% in 2020, with a major downside risk being the sharp decline in oil prices. A significant chunk of government revenues are derived from oil exports, and as this begins to decline in the coming months, major publicly-funded infrastructure construction projects could be pushed back or cancelled outright.

Turkey: As the economic outlook worsens and the government’s fiscal position set to weaken due to the virus outbreak, the construction sector is also set to be adversely affected. Infrastructure construction will be particularly affected. Prior to the crisis the government had been financing major infrastructure projects across the country, but it is likely that it may not have the ability to fund large scale infrastructure projects in the medium term. Commercial construction will also be adversely affected, with global tourism set to collapse this summer, particularly in the leisure and hospitality sectors, leisure and hospitality building construction are set to contract by 12.9% in 2020

Czech Republic: Although the country took steps at the end of April to ease some of the COVID-19 containment measures, the construction sector has been disrupted, with reported delays in commercial and residential projects. However, the government is pushing ahead with infrastructure developments, announcing that preparation of state orders for transport infrastructure works have been approved, with planned spending increased by CZK6.5 billion (US$0.26 billion) above the current budget.

China: Investment activities started picking up in March in China, and showed a further improvement in April, with the latest data showing investments in real estate development growing by 7% year on year in April, which followed marginal growth of 1.1% in March and a 16.3% contraction during the first two months. To support the ongoing recovery, the Chinese government has accelerated the launch of new projects. According to the NBS, the country had 22,693 projects underway at the end of April, of which 5,614 projects are large projects (those valued at more than CNY100 million). The number of projects had increased 10,695 in April. Reflecting the acceleration in the disbursement of funds for infrastructure, which will help support a recovery in construction activity in the coming quarters, GlobalData expects construction output growth of 1.9% in China in 2020.

Many governments are likely to attempt to accelerate infrastructure projects to generate growth momentum and provide economy stimuli. Their successes will depend greatly on their capacity to continue to fund such schemes while dealing with the hit to their fiscal positions from the economic downturn and support packages for households and private businesses.